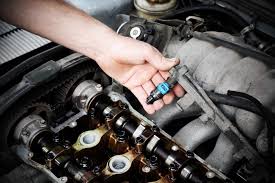 Your vehicle’s fuel injectors are designed to provide precise performance for tens of thousands of miles, but occasionally they do wear out. You can help prevent this with regular maintenance, including fuel injector cleaning, but there is still a small chance you will wind up needing a replacement sooner or later, it’s just the nature of machines to occasionally need new parts.

Figuring out it’s the fuel injector can be the hard part. There are a few different malfunctioning parts that can produce symptoms similar to the fuel injector breaking down. They only share some symptoms, though, not all of them. That means you can narrow things down, if you know all the important signs you need to order new fuel injection kits.

If it takes more time for your car to fully start, that’s a sign your fuel injectors are having trouble. Slow crank times are different from the sound of a starter failing to engage the engine, but they can cause similar delays if left alone.

OBD2 diagnostic code readers often pick up a code for detected engine misfires if the fuel injector is not supplying the right amount of fuel at the right time. It can also be caused by spark plugs and a couple other issues, but combined with longer crank times it becomes more likely you are dealing with a fuel injection issue.

If you notice lower acceleration power and rough engine performance, you might be experiencing fuel restriction. When the fuel system can’t send enough fuel into the engine each cycle, it bottlenecks your performance and lowers fuel efficiency.

There are many reasons for fuel restriction on its own, so as with the other symptoms, it’s more likely to be the issue if you see a group of signs. Decreased engine performance that is not linked to the fuel system might be addressed with the addition of a performance exhaust upgrade to help with airflow.

5. The Vehicle Fails To Start

If the fuel injector fails to deliver fuel to the cylinders, the engine simply won’t start. That’s the end result of the steadily lengthening crank times that are often the first sign of injector failure. Ideally, no one lets the issue go unaddressed long enough to have this happen, but sudden and total fuel injector failure is possible. Paying close attention to the other signs of fuel injection issues can help you avert failure in many cases, though.

If you want to simplify your DIY auto maintenance, bundle your new fuel injection kit with the other supplies you need to keep your vehicle in great shape. Wilwood calipers make a great choice if you are also working on brakes, and ordering everything you need at once makes shipping simple.