How to Unclog a Kitchen Sink Drain with Standing Water 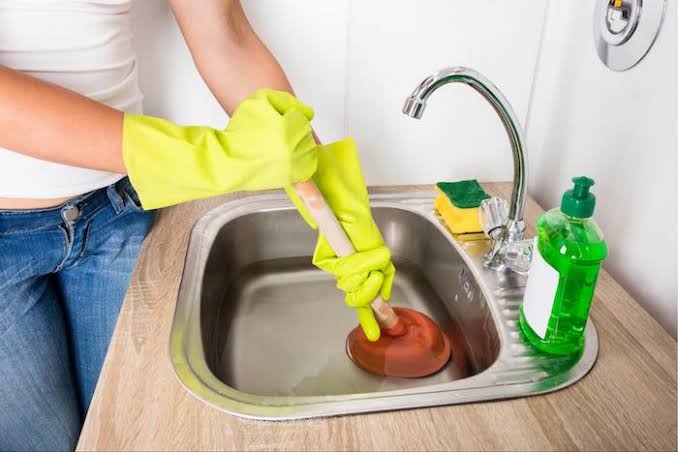 The kitchen is the busiest part of any house. Cooking, washing, and serving delicious food are carried out there. Everything here needs to work properly. However, you will likely experience some problems, the most common of which is a clogged kitchen sink.

With a clogged drain, standing water will build up in the sink. Due to the food wastes, debris, and mineral buildup, the pipes are blocked, causing water coming back up the kitchen sink.

Unclogging a drain with standing water can be accomplished by combining different methods. Ensure your garbage disposal works properly, the P-trap is clean, and water normally drains from the pipes.

Keep on reading to learn the steps involved in unclogging the kitchen sink drain. Before that, let’s explore the reasons for drain blockages in the following section.

Reasons Your Kitchen Drain May Clogged

Most kitchen drains get clogged at some point. Many reasons can cause this clogging, including food residues, vegetable cuttings, and other forms of debris.

Listed below are some of the most common reasons why kitchen drain clogs:

The most common cause of kitchen sink drain clogging is food leftovers. Despite how careful you are, you cannot prevent food waste from getting into the kitchen drain. Things like fruit peels, rice, meat, or other food waste are hard to get through and break down.

Moreover, the mineral deposits can also entrap the food particles, fat, and other residues passing through the sink pipes. It is pretty hard to remove this mineral blockage.

Most people think that fat, oils, or grease cannot cause clogging, but the buildup in the pipe can do this by capturing food particles. Similarly, a traditional soap bar that is made of animal fat can trap residue inside the pipes.

The drain can get clogged with almost anything, from rings and hair to eggshells.

How to Unclog a Kitchen Sink Drain With Standing Water: Step-by-Step Guide

Here are some of the things you can do to get rid of standing water in the sink before hiring a plumber:

In most cases, boiling water can help remove grease, food residues, soap, and other debris. Boiling water can dissolve blockages and flush debris from the pipes. It is the easiest solution to unclog a sink.

The process is pretty simple: all you need is to boil a half gallon of water on the stove. Directly pour this water into the drain. Make sure the water drains steadily when the faucet is turned on. If it still doesn’t drain or remains standing in the sink, repeat the process.

This step does have one limitation. Boiling water may damage PVC pipes used in drains. So, avoid using this method if you have PVC down there.

Proceed to the next step if water still stands in the sink or drainage is slow.

Most sinks have a garbage disposal, which is mounted underside of a sink. It uses a spinning disc to break up solid food wastes in its grinding chamber. Sometimes due to overheating or other functionalities issues, leading to drainage issues.

It is easy to fix a garbage disposal by rebooting the unit by pushing the reset button on the side or bottom. When you have reset the device, turn it on to begin the unclogging process.

In some cases, resetting the disposal unit will not be enough. It is also common to encounter blade jamming, which is characterized by a buzzing sound. You can fix it by manually moving the blades, but ensure to disconnect the power.

Insert a wrench or other tool into the hole underneath the disposal and twist until less resistance is felt, indicating the blockage has begun to dissolve.

After the disposal is unclogged, turn on the power again and test it. Once everything appears to be fine, turn the faucet to see if the drain is working again.

Step 3: Use a Plunger

After you reset the garbage disposal and still have a standing water issue in the sink, you can use a plunger to unclog it. A plunger is a tool that works using suction and pressure. For this purpose, a flat-bottomed plunger is recommended.

Before you get started, fill the sink with hot water and block the drain. Start pushing the plunger cup up and down several times over the drain opening.

The water should drain after removing the plunger. If it isn’t, repeat the process several times until it drains normally.

P-traps are the curved sections of pipe underneath sinks. In many cases, it gets blocked with food debris. Take out the P-trap and thoroughly wash it.

You can use different tools like channel-type pliers to pick up the trapped garbage from the pipe. Remember that removing the P-trap will result in a great deal of water spilling and spilling debris. So place a bucket under the P-trap.

Step 5: Use the Drain Snake

Blockages can sometimes be found deeper than P-traps. For this, you will need to use a drain snake. Using the tool, you can reach down the drain with a spiral snake wrapped around the handle.

Upon hitting a blockage, move the tool against it so that the tip attaches to it. Then, pull the snake out along with the clog. You can clear the pipe by running hot water.

You can use different natural options to unclog the kitchen sink. Baking soda and vinegar are quite effective in dissolving the clog.

Here’s what we need to do. Remove the standing water and pour one cup of baking soda into the drain. Afterward, add one cup of vinegar. Wait for around an hour to let both these ingredients work. Then, run hot water down your sink drain.

The process should be repeated until the clog is completely removed.

Kitchen sink blockage is a common problem that you may encounter at some point. Because of a clogged drain, water won’t go down the sink, which requires immediate attention. Unclogging a drain at home can be accomplished through a variety of steps.

In most cases, removing standing water from a sink is a trial and error process. Though many experts avoid using hot water in the drain, it is the easiest method to unclog your sink.

Alternatively, you can reset the garbage disposal, work on P-trap, use a drain snake, or add natural products to clear a clogged drain with standing water. Even though each process has its shortcomings, combining them can surely solve the problem at hand.

Hopefully, this article will teach you how to unclog a kitchen sink drain with standing water and save you some money. However, If nothing works, you should call a plumber to fix the problem.

Why covers are the ideal choice for patio

What material is used to make blinds?