What are Rational Numbers? 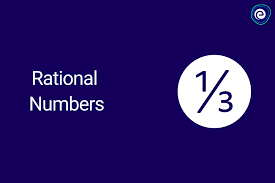 A number line is nothing but a straight line marked with regular intervals in which the numbers can be placed in sequential order. The use of number lines in mathematics is a very useful concept that provides a visual representation of the position of numbers and helps in analyzing the relationship between numbers. On the number line, the middlemost point is for the value ‘0’. All the other numbers are placed on both sides of zero at specified intervals. All positive numbers are placed on the right side of zero with gradually increasing values from left toward the right. Again, all negative numbers are placed on the left side of zero in a way such that the values decrease as we move from right to left. It also ensures that if we move from left to right on the number line, at any position, a number has a greater value than the number on its left side and vice versa.  We can use the number line to represent any type of number, such as whole numbers, integers, fractions, decimals, rational numbers, etc. Learn more about this topic on Cuemath.

The numbers can be plotted on a number line through the steps mentioned as follows:

By plotting the numbers on a number line, we can easily perform basic arithmetic calculations using the numbers. For example, if we need to add 5 and -3, first we start from -3 and move towards right up to five steps. The point we get gives the result which is 2.